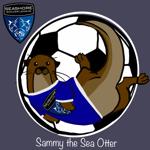 The Juniors program at Seashore Soccer League provides young players with an introduction to soccer. Our age-appropriate curriculum ensures players will master new skills every session. Skills include dribbling, passing, goal scoring, teamwork, and more! Each session, our coaches will teach players a new skill, and they will put it to use in fun games as well as scrimmages! All of our coaches have extensive backgrounds in playing and/or coaching soccer, and we hope to instill our love and passion for soccer in our young players!

This program is for players aged 3-5, and will run once a week for 8 weeks. Our juniors practices will consist of pool training. This means that there will be no teams. Instead, all players will practice together and focus on individual development. Pool training is very beneficial because it shifts the focus from team success to every player’s improvement. It helps beginners focus on learning and loving the sport instead of winning or losing.  Also, it helps coaches give deliberate and consistent instruction to each player. See below for a preview of our curriculum.

Players learn how to take small kicks to keep the ball close. We dribble the ball to control it, and pass to teammates or score a goal. Players can say “tick tock” or say the alphabet every time they touch the ball. Players learn to stop the ball with the bottom of their foot, use this as a “ready and paying attention” position.

These are fun skills players can practice throughout the season, in all of the games we play. Young players will love to practice at home and show their family. Juggling, toe touches, tick-tocks, rollovers, and pull-back.

Players learn to kick the ball as hard as they can into the goal using their laces.

Players learn that teamwork means to work together to score a goal. We don't steal the ball from our teammate, we try to pass to them so we can move up the field.

Players learn that offense means to try to score goals. We play offense when we have the ball and are dribbling, passing, shooting, and scoring.

Players learn that defense means to stop the other team from scoring a goal. We play defense by not letting the other team run past us, and blocking them when they kick the ball.

Review of all of the skills we learned: dribbling, scoring, passing, teamwork, offense, defense. Player share their favorite games and activities from the season, and we’ll play them all. We’ll end the season with a final scrimmage.